Aaaand the movie version of this week:

One-sentence summary: I flew from Lima to DC, landing with a familiar hug delivering a suitcase full of winter clothes and a bag of favorite groceries; arranged medical appointments with the National Institute of Health (NIH); admitted as a subject for an international research study; spent a day in exhaustive medical testing; coordinated information and proposed NIH treatment plans with PC Headquarters; perfecting the global art of Hurry Up and Wait; and marveling, and in awe, at the depth and profundity of how much I feel loved.

Right Now: Sipping coffee and CREAMER (first time in almost a year) in a hotel room in Georgetown, patiently waiting on go-time for medication.

Expression of the Week: “You are a lot of things but ‘low-maintenance’ is not one of them.” Tough love from the people who love me the best.

Week Thirty-Six. Mike & I are on a whirlwind tour of the nation’s capital. If I wasn’t the live host of this protozoa-of-interest, this would feel like a paid vacation to a NASA-level Nerd Disneyland.

Also we have been hiding a lot in the hotel room. Re-entry after a year away from the States means treading lightly.

For those of you just here just to skim:

I am 100% fine. I landed a first-class ticket at the world’s center for research. I have an excellent prognosis. The initial treatment plan is going to be one-month long and out-patient. I am on-target to return to Peru and continue service at the end of March.

The week consisted of voraciously reading manuals, medical journals, Peace Corps medical evacuation protocols, and NIH research study consent contracts (this time in ENGLISH); returning messages to loved ones; reciting the rote speech of my patient history ten-to-seventy times a day; donating parts of my body to NIH labs; randomly bursting out sentences in Spanish forgetting I am in the States; and a dedicated side effort to takeout Thai food and hiding under the hotel bedcovers.

I am waiting on biopsy results, confirming my specific strain of Mike (we are hoping still Brazilian) and to begin treatment. Current target: Tuesday.

The only thing worth reporting in more detail was My Very Fabulous Day at NIH.

Confession: For self-preservation, I gave up Googling all things on the Internet the last two weeks. So when I arrived to the wrong entrance of the NIH campus in Bethesda, Maryland, (larger in size than Oxapampa, my site in Peru), naively thinking I was headed to yet another doctor’s office for yet again the same tests– the more-than-airport-level-security was my first clue that maaaaaybe I needed to re-evaluate where I was sent.

I really wish I had brought a Plus-One. At first just to help me recalibrate reality each stop along the way. And secondly, to bear witness what the best medical research agency in the world looks like from a front-row seat.

First off: Every single person I encountered (and I did some Jess-level encountering) from security guards to Captain of Visitor Badges, to barista to lead scientist doctor types– were each, in their turn, deeply kind.

I was consistently treated like a human with intelligence and emotion.

That would be sufficient for the end of my testimony right there.

Second: I want to work here.

Every single person, without fail, was full of joy. Maybe they were just happy because I was akin to a six-year-old just seeing a pod of dolphins in the wild with saucer-sized pupils wandering around chasing my open-jaw… or maybe people like working there. Because it is the M.F. NIH.

Third: Snacks. They offered snacks and brown paper breakfast bags and coffee at each station I was parked at for various tests. Free snacks. Like, Oh heyyyyyy Darlin’ while you wait for these lab tests do you want a scone?

Fourth: Organization. There was order and numbers and check-in scan codes and schedules and efficiency and everything was in too-easily absorbed English. I snuck into two appointments early. I tried to hug the computer admission kiosk at the pharmacy. I did hug the poor man (Brandon) who was assigned my intake, security badge, and patient bracelet– who handed me a new patient orientation packet and told me I won the lottery ticket of medical treatment and didn’t even need health insurance. My blood panel lab results were in the doctor’s online portal faster than I traveled by elevator up three floors.

Fifth: I have a personal medical team that answers phone calls, texts and emails. [I am living in a land of freaking Unicorns.] Elise and Jean-Anne didn’t just ask me about my patient history and other on-going symptoms. They wanted to know what I love about Peace Corps, if I wanted to go back, where I got my boots, and laughed hearing the recount of how surviving a bridge collapse lead me to an early diagnosis. We are all going out for drinks later. 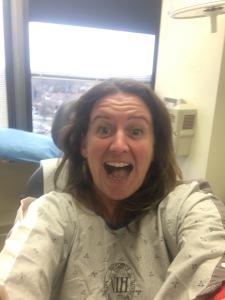 Sixth: I may or may not have been less-than my best self during the biopsy. It was the low-point after seven hours of tests and exams. I may have had an itty-bitty involuntary trauma response to a “punch biopsy” where Dr. Ego took a sample larger than my actual Mike-lesion, sending me into attack mode.

Turns out everyone was not lying and lidocaine makes you numb and there’s no reason to prepare for the worst pain of your life (see: last week’s multi-scrape via razor without anesthetic).

Dr. Ego got a front-row exam chair to Jess-Jekyll and Jess-Hyde. I warned them before I needed restraints. We made up when I realized no one was lying to me.

“Mike” is now FrankenMike. I am the proud bearer of a parasite with a side piece of four sutures –the first stitches of my life. (Not a bad story.) The drill sample they took from my arm had to scope the margin of my bug bite — so I am hoping my scar is going to be a cult-like Venn diagram.

Until then, I will keep writing you all the happily I am ever after.

Leaderboard: Two care packages arrived to my hotel in DC.

Emergency cheese sticks from Pan d’Amor in Port Townsend and a Harvard sweatshirt from that guy who abandoned me after pre-service training who still manages to be my friend from graduate school.

You guys are amazing.